Korrash is a svirfneblin in a suit of scale armor, with a throwing spear on his back and a pike in his hand. A pair of iron manacles dangles from his hip.

Theme Song
“Who, him? That there is Korrash Darkchaser. Aye, he’s a Zil, but a rather unusual one at that. Of course, the first thing you notice is that he was born in the depths of Lower Zilargo, and you know the folk down there…working in the mines of Khyber, they lead a much different life than us up here. Folk down there are stronger than your average gnomes, and Korrash is no exception. What makes him exceptional is his frequent time spent in Eberron and Khyber. “
“I’ve heard that he is the oldest child in his family, and not being blessed with the usual Zil charm and subtlety, he had to find his own way to help take care of his younger brother and sisters. Kind of disappointing, considering his lineage. Of course you’ve heard of Korranome the Unifier? Well, he is his great-great-great-great-great grandson. My, how that family has declined…”
“Poor Korrash, from a line as great as his, all he could amount to was a bounty hunter. He is pretty good at it though, and he is certainly a gnome you can Trust. He’ll track a quarry anywhere. You don’t believe me? What, about the first part or the second? Oh, the first part. Well, if you doubt me, feel free to try your luck at arm wrestling. You don’t get jelly-limbs from working in the mines, that’s for sure. Better catch him quick though; he doesn’t stay jobless for long.”

Korrash emerged from the bar a few minutes later and a few gold richer after winning an arm-wrestling match with some poor oaf who thought he wouldn’t have a problem with “just a gnome”. Korrash grinned slightly as he headed towards the local Kundarak bank, hoping work would find him. Sure enough, he arrived to find a scroll case waiting for him. After he secured a private room, he unscrolled the bottom of the case, and no sooner had he touched the scroll inside when he heard the voice of his old mentor, Ungar d’Kundarak. “Korrash, we have a new mission for you. The halfling rogue Dursa has been pronounced an enemy of Zilargo and is currently on the run. You are to come back to Sharn at first light. We will have a ticket waiting for you at the Kundarak bank in the University district. You will know Dursa by his mohawk and demon-eyes—one eye yellow, one eye blue. When you have him apprehended, bring him to the service entrance of Morgrave, where we will have your payment waiting. As usual, a tenth will be sent to your family in Khyber.” Good old Ungar, thought Korrash. How the Trust ever got a hold of a Kundarak, I will never know. That’s the Trust though…they are everywhere, keeping an eye on everything for the good of Zilargo and the Five Nations. Strange, though. He had an unusual sense of urgency or…something in his voice…Korrash was deep in thought as he left the warded booth and paid his fee.

That night, Korrash dreamed of his least favorite hunt. He and his long-time companions, Thorn and Jubal, had been tracking the war-criminal Mordonn for a week and they had just closed in on his camp. Jubal was spreading his illusion magics as usual, giving Mordonn the last sense of security he would ever enjoy while I was lying in wait and Thorn was setting his snares. Everything was going according to plan, and I could feel the weight of the purse this bounty would bring for each of us, and I could already taste the stag sirloin it would buy me. Finally, this Brelish traitor was going to pay for all the blood on his hands. Somehow he had managed to intercept a Sivis message that gave away the position of a secret Brelish task force, and he got every last one of them killed—Karrnathi undead overtook them, led by some sort of vampire or demon. He’s been on the lam ever since…I gritted my teeth and tried to refocus my mind on the job at hand. Nothing’s ever over ‘til it’s over. Yes, this butcher was just as dangerous as ever if we didn’t keep our wits about us.
_ Thorn gave the signal, and we all converged on him. Just as Jubal was about to land the first blow…Thorn…he took his rapier and stabbed Jubal in the side. I stood there, stunned as I watched the horror on Jubal’s face. Mordonn slowly stood up and clapped Thorn on the shoulder. Jubal, with his shock turning to fury was able to muster his last ounce of strength and thrust his spear into Thorn’s right eye. Mordonn backhanded him to the ground, and as Thorn doubled over in pain, I fled._ Korrash woke up in a cold sweat. Though it was not yet first light, Korrash knew any little sleep left he could get would bring him no comfort. He strapped on his armor, prayed for a blessing from the Host, and set out in the dark of the night.

1. Avenge Jubal and kill Thorn.
2. Protect the Zils and the interests of Zilargo.
3. Secure a better life for his mother, brother, and three sisters.
4. My goals for the character: I want Korrash to be useful member of the group by securing us bounty-hunting jobs, have an epic one vs. many battle, and lead the party through an expedition in Khyber. 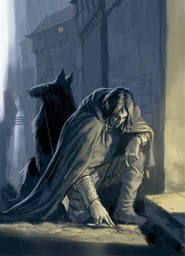