I was a child when they took me from my green sanctuary in the forests of Valenar. The forest elves that live there still, so-tepesh- naïve in the ways of man and the modern world. Of course we accepted the troupe of entertainers into our midst- a family of halflings, no threat if you hold a mandolin instead of rapier, lo? For all of the laughing and tumbling and singing my parents, my mispaha- family, missed how the Halfling man watched us. The children. Who among us was beautiful? Whose face stood from the crowd of even featured elfkinder? Funny trait to seek for a future spy. Imagine, having to pick the shiniest diamond. And her beautiful song-bird voice, I can still hear it tinkling chimes in the breeze like something from the Godess… the woman they sent spoke to each child in one way or another. I wonder still how they measure intelligence from such short conversations. “Do you like to read, child? What’s your favorite story?” Would that I was born simple or homely, I would call a tree my home. Sigh. Someone must have trained them to sense that innate talent just as they have trained me. Nu, anyway, no money exchanged hands and no violence was done against my people. It was presented as a chance for growth, opportunity, learning and adventure. What elf does not wish progress and growth for their child? Like the roots and the branches of the trees from which we made our homes, if you were not growing, learning, reaching for new heights… you were dying.

And what new heights I discovered. First, my young life splashed along the shores of Lake Cyre where the halflings stop their ramblings in Gatherhold. Here, among the traders and open air markets [She takes a deep breath, her chest rising causing the light to glint on new facets of her layered gold, ruby, sapphire necklaces. When she lets it out, it comes trembling.] I can still smell the spices on the air and the underlying smell of cart mules, ale houses, wafts of perfume from ladies- the jasmine flower. Here, along that glimmering mirror lake was the place I called home until they deemed me ready. So many types of people, noises, languages- cha, before I knew it they were behind the gauzy curtain that hid my new abode in plain sight. A yurt to hold a hundred people, it looked like all of the rest from the streets of the bazaar. But inside… once past the sleepy, one eyed guard, laid the Scarlet Veil, masters of hospitality, entertainment and holders of the key to your greatest heart’s desire. Not to mention, trainers of Khovaire’s foremost intelligence agents.

Oh how they scrubbed that forest green smell from my fingers, toes and hair until I emerged from their steaming marble baths like a newborn. And I learned. Some see the work that I do on the surface and they call me “whore.” That might be true but in that next decade my memories of ever-green canopies dimmed and my gold-soft mind was melded into something fierce, acerbic and dangerous. See what happens if I hear you insult me. Poetry, fencing, tea ceremonies, the martial art, poison study- I still feel queasy in recalling the nights spent retching up some sweet cake whose honey masked the belladonna I was to have found. Such were the tests I underwent to ensure that if a job needed to get done, sexual, musical, educational or otherwise, I would do it and excel. Under the tutelage of my master, an achingly beautiful, raven haired human from Thrane, I learnt to weave a story with arcana so that the mind saw the wonder that my voice created- and nothing else. Her name was Sippora and she had not been taken as I had so much as offered up by her poor farmer family. They did not see the shine of intellect in her eyes or how appealing her feature might be if you uncovered years of dirt and hard labor. She truly benefited from leaving her home, from straw and lice to goose down and spider silk is a good upgrade, B’emet.

Nu? Where was I going with this? Ah can, can… So for the next decade, I used the knowledge they imparted to complete the missioned deemed important by the Veil. Along on such mission, escorting a Captain of the Guard to a military ball for the royal house of Kaius III, I met my associate Zane. I was hoping to use said Captain, a brute of a Dragonborn named Rhan or Rhick or some such nonsense to gain access to the lady of the house. Not the queen, mind you, but Kaius’ mistress who was the king’s true bedfellow and therefore, I imagined, the woman who shared his pillowtalk. Men say anything when they believe themselves enamored of someone. Anyway, Zane was hired on as extra help for the ball and was quick and clever enough to see through my act. I had thought the feat to be impossible and asserted that I must make him an ally or forever know that there is someone out in this dragon blasted world that might see that I am up to something, generally speaking.

Now the Scarlet Veil has granted me freedom to choose my missions, thanks to a scandalous tidbit about our glorious leader that a little bird told me. The little bird also happened to come with letters and an official seal to prove it. Next, Zane and I had hoped to glean information from one General Richard d’Orien, “Dicky” I call him. Anyway, “Dicky” has some fantastic ideas and a meeting with some Very Important People about something Very Secret so we’re off on a short pleasure cruise. B’shana haba b’Valenar!

Something you should know about May’m
It is highly unusual for agents to be more-or-less freelance. The Council of the Veil is happy to use the knowledge May’m gleans and maintain a working relationship. However, one council member who May’m happens to be blackmailing would rather see her dead. He is a dragonmarked Halfling from the House Ghallanda named Hammon. One of her motivations for accepting Zane as an associate is for her own protection. Prior to their coming together, she narrowly escaped an attack on her life from one of Hammon’s assassins hired from outside of the Veil.

Goal:
Thwart the attempt of House Orien in order to maintain the balance the Veil has worked so hard to achieve. 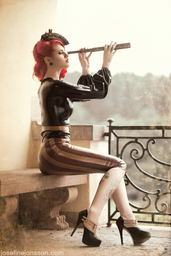